It is believed that food and lifestyle of a particular place resemble its tradition and culture. India has a perfect blend of various cultures and traditions, so it is quite obvious that there will be variety in Indian food and cuisine.

Not only Indian culture but also the food in India has been influenced by different civilizations. Indian Foods are popular for its spiciness. Whether in North or South India, Indian foods are prepared using several spices. Each of these spices used in various Indian dishes possess some nutritional and medicinal properties.

Indian food differs from the food of other countries in the world in terms of taste and cooking methods. In North India, Kashmiri cuisines reflect a strong influence of Central Asia. The staple food of Punjab, Haryana and Uttar Pradesh is Chapatti or differently baked breads like – Tandoori Roti, Rumaali Roti and Naan. 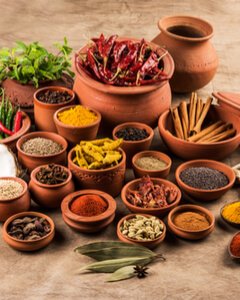 But most of the cities of Northern India like Delhi and Agra have Mughlai impact in their food and cuisines. Delhi also has the Punjabi influence in the food and so, Chhole Bhature and Rajma Chawal can be found in every food joint or street stall.

Different communities of eastern India like - the Bengali, Odiya and Assamese have noticeable styles of cooking. Their staple food is rice and fish. Sweets like Roshogolla, Chamcham and Mishti doi are popular among Bengalis. Most of the South Indian states have coastal kitchens, so they make great use of spices, fishes and coconuts. People in Tamil Nadu use tamarind in their food making it different from other cuisines. In Andhra Pradesh people add more and more chilies in their dishes to improve the taste.

Some of the delicious dishes of Kerala are the Lamb Stew and Appams, Fish Molie and Rice Puttu, Malabar Fried Prawns, Idlis and Dosas. Sweetened coconut milk is another popular item of this region.

The West Indian food like Rajasthani and Gujarati cuisines are known for their unique taste and varieties. Different kinds of Dals and achaars (Pickles), substitutes the shortage of fresh vegetables in these areas. Maharashtrian food is usually a combination of both north and south Indian cooking styles. Rice and wheat both are equally consumed in Maharashtra. Some of its popular dishes include pomfret and Bombay prawn.

The Goanese food has Portuguese influence in it. Sweet and sour Vindaloo, Duck Baffad, Sorpotel and Egg Molie are some of the major dishes of Goa.

Every corner of India, have some specialty such as Kashmir’s Mughal Biryani, Rajasthan’s Dal Bati Churma, Gujarat’s Khaman Dhokla and Idli Dosa of South. We design the special Itineraries in a way so that one can enjoy sumptuous food during their vacation in India. Not only this, our mentors will help you to prepare various mouth-watering dishes.

Cooking classes during India tour are interesting and fun. You will learn the authentic way to cook Indian dishes in the shortest possible time using the ingredients, which are easily available, without compromising quality and taste. We will help you learn how to cook like the Indian Families.